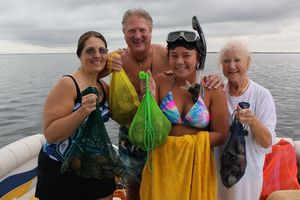 What a difference a moth makes!! A month ago the sweltering heat and humidity made early mornings a must. The early starts to our days rewarded us with beautiful early morning temperatures, NO rain (usually), and a sunrise that would rival any Caribbean island. Did I mention that the early morning fishing was fantastic as well? The earlier starts of last month provided my customers with banner Redfish, Black Drum, Snook, and Scalloping days due to the early morning activity that most Nature Coast gamefish tend to show this time of year due to the slightest drops in water temperatures. 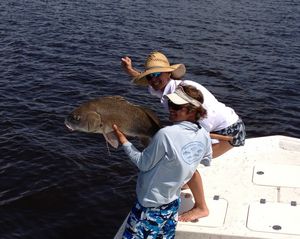 The start of September on the other hand has been fantastic due to the lower humidity (as of late), the abundance of afternoon and evening showers, and I really can not tell you how much the winds and weather of Hurricane Isaac benefited our area. Throughout the summer months most of the Gulf lacks consistent winds which provideS a cool down through the churning of the seas. Without this churning the Gulf can become a sauna due to the lack of water movement. When hurricanes and tropical storms enter the Gulf the mixing of 81 degree Gulf water with 86 degree local waters not only provides a cool down but also infuses oxygen throughout all of our local waters allowing fish to feed more actively and also jumpstart migratory patterns.

Tropical Weather tends to jumpstart migratory species like Redfish and Black Drum into leaving their backcountry homes for the safer more nutrient rich offshore areas where these fish will begin their spawning ritual. The key to this migration for fishermen is that these fish will tend to school up before heading offshore to spawn, and before they leave they always gorge themselves on one more feast before making their long journey. This most definitely is the time of year that anglers tend to see spectacles that they only read about in magazines or watch on TV. Thousands of fish schools feeding on the surface turning 20ft of water into a giant Red mass is what this time of year is all about. And all it takes is to witness this event one day and you will be sold the rest of your life, just ask my customers Jay and Nancy Allen whom have had the opportunity to witness these events at least 6 times in the 7 years we’ve been fishing together.

Another added benefit to tropical weather is that it enhances currents, tides, and swells. That being said many migratory species pickup these currents and ride them to where ever they take them to. Bonita, False Albacore, and Tuna are noted species that follow this trend which would explain why over the recent weeks a handful of commercial fishermen have landed a number of Blackfin and Yellowfin Tuna along the Grouper Grounds just off our coast. As if that isn’t crazy enough an angler out of Homosassa reported not only hooked but landed an Atlantic Sailfish in the same waters where we troll for shallow water Grouper in 30ft of water. 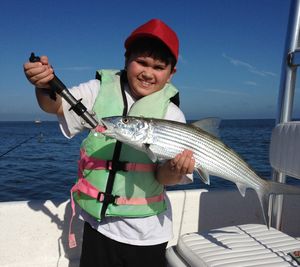 To cap this amazing chain of events off comes the catch of the year along the Nature Coast. Tuna and Sailfish are great species known to every once in a while swim into our waters, but a BONEFISH to my knowledge has never been seen let alone caught along the waters of the Crystal River until now!!! Capt. Clay whom is a very good friend of mine and excellent Captain came across the first Crystal River Bonefish on September 1st. Obviously, this fish rode the currents of Hurricane Isaac but to know that there was a Bonefish swimming around my local waters shoots shivers up my spine. This is by far the greatest catch in Crystal River to date and I hope I hear of many more in the coming future!!!!

This just goes to show you, you never know what each day of fishing may bring. One day it could be a great battle with a Redfish or Shark, the next day you could be fighting the first of its kind for our area. The only way to do battle with the unknown is to get out and give it a shot.