If you like fast running, hard fighting fish, then the False Albacore action happening along the Nature Coast is a bite you don’t want to miss. Long considered a trash fish by Gulf Coast anglers in search of more prized food fish, False Albacore have an unfortunate reputation as a fish with no food or sport value. But as most fly anglers will tell you, the arrival of False Albacore is one of the most highly anticipated seasons that our area experiences throughout the year and I for one am happy that it has finally arrived. 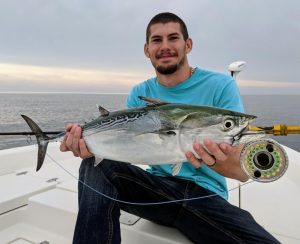 During the months of October, November, and December the near shore waters stretching from Homosassa to Yankeetown are ground zero for some of the best False Albacore feeding frenzies found anywhere in Florida. Over the past four or five years, the schooling fish inhabiting our area have gotten larger in both numbers and size. Albies in the 8-12 pound range were once a rare sight along our coast, now they are an everyday occurrence. And with more and more fish showing up on daily basis some of the schools that we’re chasing these days are pushing acres in size. 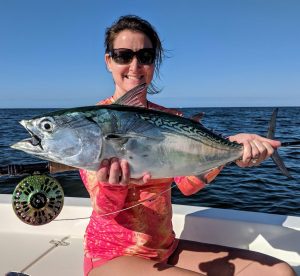 The beauty of fly fishing for False Albacore is that long casts are often unnecessary, because Albacore can erupt right under your boat. However, anglers who can throw a long line with a tight loop have an advantage when it is necessary to punch a fly into a stiff breeze. More important than distance is the ability to cast quickly and accurately. Anglers who can cast quickly in all directions using both the forward cast and backcast to deliver the fly will be most successful in this run and gun style of fishing. Albacore move quickly, slashing and turning. They do not (like Bonefish or Redfish) move by slowly waving their tails in the air. 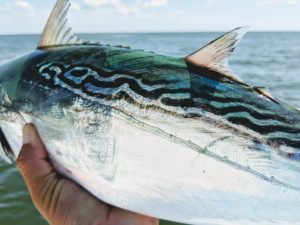 As more and more anglers come into contact with False Albacore they will most likely shake the high-speed trash fish persona. Today they are the hottest fish along the Nature Coast. Their raucous surface-feeding habits make them prominent targets for well-presented flies. Few fish possess the speed and stamina of a False Albacore. Perhaps best of all, there should be plenty of them for the foreseeable future, because not even a famed chef such as a Paula Dean or Paul Prudhomme can make them fit to eat.